An equalizer, also known as an audio EQ is an important tool to master if you want to get your music, or audio sounding professional. When you first open one up though, you may as well be trying to operate a spaceship. If you’re new to audio production then all of those controls, numbers, and colours can seem a little bit strange at first.

It takes some time, but after a while using an audio EQ becomes like second nature. Mastering an equalizer however, takes a lot of time and practice, having a good set of ears also helps. In this article I’m going to answer ‘What is an Equalizer?’ by detailing what it is, how it works, and I’ll give you my top tips on how to us EQ effectively. To understand how an equalizer works, you first need to know what a frequency is.

TWe use frequencies to measure sound from low to high. For example, if the sound frequency is 1,000kHz, it’s vibrating 1,000 times per second. In audio production we measure low frequencies with Hertz, and high frequencies with kiloHertz; 1,000 Hertz would be written as 1 kiloHertz (1kHz). It just makes things simpler and easier to read.

For example, the lowest a human can hear is 20 Hertz, and the highest a human can hear is 20,000 Hertz, so we would say that the human hearing range is 20Hz – 20kHz. Some animals can hear much higher frequencies than humans. For example, dogs have a range of 67Hz – 45kHz, which is why they can hear a dog whistle that has a range of 23 – 54kHz. A porpoise has a staggering range of 75Hz – 150kHz, far beyond our abilities!

To learn how to use an equalizer well, it’s helpful to be familiar with the different sections within our hearing range.

How does an equalizer work?

An equalizer changes a sound source by adjusting its frequencies. You’ve probably already used a form of EQ if you’ve ever owned a h-fi home system, guitar, or bass amp. Normally they have bass (lower frequencies), mid (midrange frequencies), and treble (high frequencies) controls which can either be turned up or turned down.

An audio equalizer works in the exact same way but is much more precise and versatile. It can boost or reduce any frequency or range of frequencies across the human hearing range, from 20Hz – 20kHz. To see how it works let’s examine a typical digital EQ plug-in that you would find in any DAW. 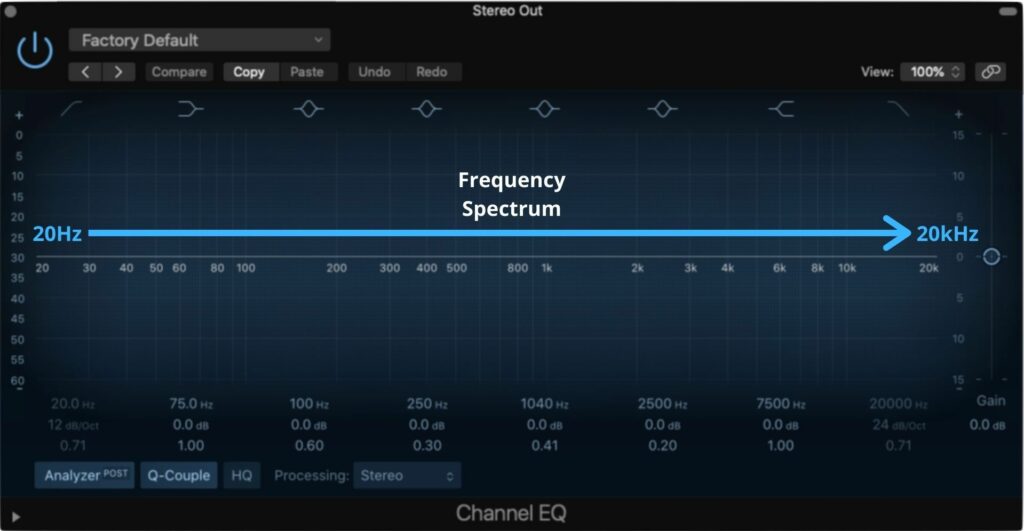 First, you can see from left to right, low to high, the range of frequencies, which as you’d expect are 20Hz – 20kHz. This is known as the frequency spectrum. 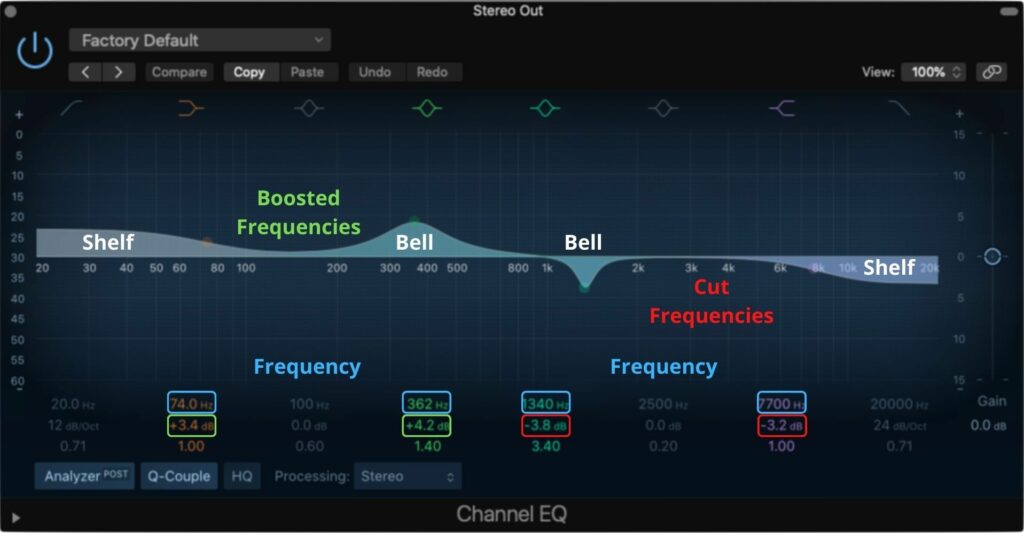 Within in this frequency spectrum you can boost or cut frequencies as you desire using a shelf or bell. Shelf filters are positioned at the high and low end of the spectrum and cut/boost in a straight line, whereas bell filters cut/boost around a centred frequency. 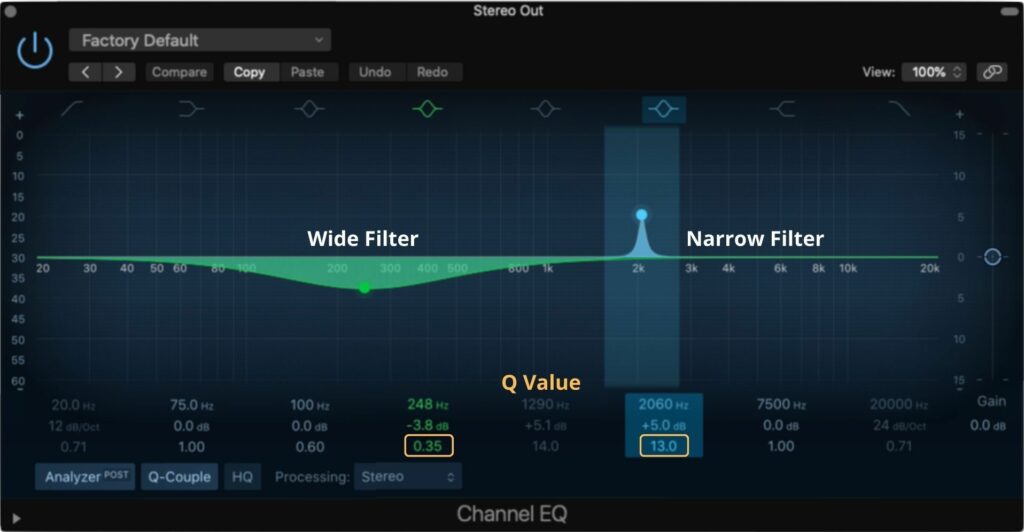 You can adjust how wide or narrow these filters are using the Q control. The higher the number, the wider the filter. The lower the number, the narrow the filter. So, if you want to boost or cut an isolated frequency, use a narrow Q. If you want to boost or cut a range of frequencies use a wide Q. Simple enough? Cool, let’s move on to high pass, and low pass filters.

When/why would we use these? If you are recording an instrument that dominates higher frequencies, such as a glockenspiel, there really is no need to have any low frequencies coming through. So, it would be best to cut the lower frequencies out completely. Microphones can also be very sensitive and can easily pick up low-end energy which can affect audio signals in a negative way. This would be another reason to use an HPF. Likewise, if you’re recording an instrument that dominates the low-end of the frequency spectrum, such as bass guitar, then it’s a good idea to cut the high frequencies with a LPF to clear up as much space as possible.

How to Use an Equalizer for Mixing

Let me start by saying that there aren’t really any strict rules in mixing. It’s a subjective thing. What sounds good to one person, may sound bad to another. You might want a polished pop sound, or you might want an aggressive sounding mix. It all depends on the style and genre of music you’re working with. However, there are general guidelines to follow to give you the best results and deal with common problems that all sound engineers and producers encounter.

My Top EQ Tips for a Great Mix

When your first starting using an equalizer, it’s tempting to just start boosting and cutting frequencies here and there, thinking that you’re going to make things sound better. But instead, use your ears and establish what the music actually needs. I can’t emphasise this point enough! What’s wrong with the mix? What could improve the mix?

Closing your eyes and intensely listening to the music helps to give you a fresh perspective, without being influenced by the appearance of the waveforms, or the plug-in settings that’ve tweaked. USE YOUR EARS and the rest will follow. Write down what you would like to improve and how it can be done before you even touch your EQ.

Another common beginner mistake is to just start boosting everything, but remember cutting and creating clarity in a mix is often more important than trying to just turn things up. You want to make space in your mix, instead of having all of the instruments fighting each other.

First, try removing unpleasant resonating frequencies. How do you do that? The best way is to first find problematic resonating frequencies is to sweep for them. To do this create a very narrow and tall ball filter by giving it a high Q and high amount of gain. Next, sweep it back and forth through the frequency spectrum until you find that pesky resonating frequency. Then, simply reduce it. You should also try to reduce muddy, brittle, or harsh sounding areas of the mix.

How about creating space? Let’s use an example. Imagine you are recoding an acoustic guitar and singer together. Both have superb tone; the guitar is very bright sounding due to its wood type, plus it just been restrung with new strings. The female singer also has a bright sounding voice. Now there’s a problem. They’re both competing for the same space within the frequency spectrum.

Prioritising cuts is a great way to start, but of course we also want to boost frequencies and enhance things, but beginners often make the mistake of over boosting frequencies, turning them up by 5-10dB but it’s simply not necessary. Small changes often make a big difference within a mix. If you start over boosting, you soon end up with a muddy mess. Be subtle when EQing, be patient, and again, use your ears. Try not to boost more than 5dB at a time. When you do boost, ask yourself, does it sound better, or worse? Have I achieved my goal, or do I need to make more changes, boosts, or cuts?

Changing from stereo to mono allows everything to be stacked on top of each other. There is no longer any stereo separation, with some sounds or instruments being in the left speaker, and some being in the right speaker, or somewhere in-between. Now you can no longer depend on panning to create separation, you have to do it with EQ. Start mixing in mono, get good separation, then start panning. You’d be amazed at how much this helps.

Also don’t solo an instrument and EQ it. What you’re doing may sound good in solo, but when you un-solo it and add it back into your mix, you may hear a different result entirely. Mix within the mix. Listen to how your subtle adjustments on one instrument are affecting the mix in its entirety.

As the old saying goes, you can’t polish a turd, and the same goes for mixing. You can’t fix a bad performance or horrendous tone. Always try to get the best performance and tone first when recording. That involves making sure the performer feels at ease, is comfortable, and well-rehearsed. Regarding tone, that depends on the microphone you use, its placement, and the sound of the room. Get those things right and rest will follow.

Equalizers are Essential for Great Mixes

You should now be able to answer ‘What is an Equalizer?’. Remember that it takes time to learn how to use an EQ well, just remember to enjoy the learning process, experiment, have fun, and the rest will follow. Follow the tips I’ve set and go from there. The best way to learn is to just get stuck in. You’ll make mistakes on the way, but it doesn’t matter as nothing is permeant during the mixing stage, you can easily undo the changes you made. Now that you know all about audio equalizers, why not read about compressors and how they work.