I’m here to clarify the confusion. In this article I will explain what a cardioid microphone is, how it works, its most common purposes, and compare it to the other types of microphones. I’ll include diagrams, easy to understand descriptions, and explain clearly the difference between each microphone type.

What are Polar Patterns?

What is a Cardioid Polar Pattern?

The name cardioid derives from the Greek word meaning ‘heart’. As you can see from the first diagram in the article, a cardioid polar pattern is heart shaped. A cardioid microphone is most sensitive at the front, giving it a strong focus on the sound source that it’s pointed to whilst eliminating sounds behind it. The heart shape is like the perfect sweet spot, as it captures just enough audio at the sides for a more natural sound. For these reasons, a cardioid polar pattern is the most popular one for a wide range of microphones.

What are cardioid polar patterns used for? 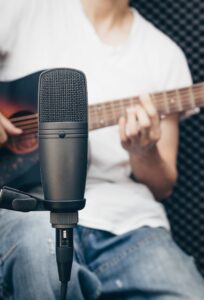 Pretty much everything. As it has that sweet spot focussed heart shape that eliminates background noise, it’s incredibly versatile. Sound engineers use cardioid microphones for live music, broadcasting, and in recording studios. They are perfect for singers, any acoustic instrument, guitar or bass amplifiers, and anything else that needs to be close miked. They are the go-to polar pattern for most applications, so you can’t really go wrong with a cardioid microphone. Now you know what a cardioid microphone is, but what about the other polar patterns?

Hypercardioid and supercardioid polar patterns are closely related. As the names suggest their pickup area is more focussed than a cardioid polar pattern. They are a little sensitive to audio behind but reject more audio from the sides. This makes them ideal for isolating sound sources from the room noise, plus they can resist feedback better than a cardioid microphone. They perfect for live environments when you need a tighter pickup pattern that will reject sounds from the sides.

An omni polar pattern picks up sound all around it in a perfect sphere, but why would you want to do that? Omnidirectional microphones are excellent for recording multiple sound sources at once, or to record room ambience.

A figure-of-eight polar pattern picks up audio directly in front and behind it, whilst rejecting sound from the sides. This is a less commonly used polar pattern than others as it has very specific purposes. You could use this type of microphone to record two singers standing opposite each other, or to record two people sitting opposite each other during an interview. 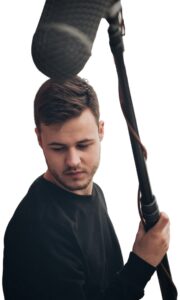 Ever seen those microphones that boom operators use to record actor’s dialogue during the filming of a movie? These are shotgun microphones attach to a boom pole that holds the microphone at a distance out-of-frame.

It’s the boom operators’ job to swiftly move this microphone so that it’s pointed directly towards the actor that is speaking at any given moment. This is no easy task; imagine trying to hold that microphone for a long amount of time, with the knowledge that if you don’t change position fast enough and miss a line, you have ruined the whole take for the that scene.

Shotgun microphones have the narrowest polar pattern out of all of them and do an outstanding job at only recording what they point to. This makes them perfectly suited for recording dialogue, talks, and speeches. Sound designers and foley artists also often use them to record sounds close up in detail.

What are the best cardioid microphones?

I hope that now you have a clear understanding of polar patterns and their purposes. A cardioid polar pattern suits most people’s needs unless they have very specific requirements, or own a recording studio where a range of microphones is essential. Some microphones do have a switch, allowing you to choose different polar patterns. These are useful as you have polar patterns to choose from, but they are usually more expensive.

If you just need a microphone to simply record a sound source accurately, that sounds natural, then don’t over complicated yourself and purchase a cardioid microphone, but what are the best cardioid microphones? Now, that certainly isn’t an easy question to answer as there are also different types of microphones. Yes, sorry it gets a little bit more complicated, but not too much. There are only two main types to be aware of.

Dynamic microphones are generally very robust, and not as sensitive as condenser microphones. This means they can tolerate loud sources well without causing damage to the microphone, making them well suited for louder instruments such as drums, electric guitar, and amplifiers. As dynamic microphones eliminate background noise effectively, they are great for podcasts, live streaming, speeches, or vocals when you don’t want to record any room ambience.

Dynamic microphones are very versatile and they usually use a cardioid, hypercardioid, or supercardioid polar pattern. They use XLR cables and require added gain to give them enough power to record. For these reasons if you want to buy a dynamic microphone, you will need to also buy an audio interface. You can read all about that in my article ‘What is an Audio Interface?’.

Condenser microphones are more sensitive than dynamic microphones, which means they are excellent at picking up more detail, nuances, and higher frequencies, especially in a recording setting. You would never use a condenser microphone for live music as they capture too much room ambience, can’t tolerate loud instruments well, and are very susceptible to feedback.

Sound engineers will often use condenser microphones for female or male singers, drum overheads, acoustic instruments, and stringed instruments. They also use XLR cables and require phantom power which is 48 volts. Just like dynamic microphones you will also need to buy an audio interface to connect and power them. Condenser microphones come in two sizes known as, small diaphragm, and large diaphragm. They most commonly use cardioid, omni, and figure-of-eight polar patterns, with many condenser microphones having the option to switch between several.

But wait, what about USB microphones?

USB microphones have become increasingly popular over the years, due to their budget price, portability, and simplicity. They plug directly into your computer via a USB cable, so no need for an audio interface. They can deliver pretty impressive sound but will never quite match the audio quality that XLR microphones have, but they do come pretty close.

USB microphones often come with cardioid polar patterns, but some also have the option to switch between several. They can come in either a dynamic form, or condenser form but can only be powered with 5V, making them significantly less powerful than their XLR condenser counterparts. USB microphones are great options if you’re on a budget, need something portable, easy to use, and you don’t require extremely high-quality audio. If you want to read more about USB microphones, check out my article ‘What is a USB microphone?’.

Choosing a Microphone Doesn’t Have to be Difficult

And there you have it, now you know the basics of microphones, and the answer to ‘what is cardioid microphone?’. Choosing the right microphone for you doesn’t have to be difficult. You should ask yourself, what is your budget? What type of microphone do you need? And what do you want to record? Once you’ve answered those questions, you should be able to choose easily. I hope that this article helped you and has given you some options to think about. Please feel free to comment down below and ask me any questions. If you’re new to recording and want to know the other equipment you need check out my article here.